With the MAFAC Course having grown to become internationally renowned, it has raised the bar for anatomy teaching and learning worldwide. The international faculty meets regularly to discuss facial anatomy, sharing knowledge and stimulating the development of new ideas. As a result, an independent institution of learning facial anatomy has spontaneously formed through the years, where both faculty and past attendees come to find answers on anatomy.

Dr. Bryan Mendelson, one of the founding fathers and soul of MAFAC, has always envisioned the philosophy of MAFAC to be different from traditional surgical teaching. Traditional teaching involves the demonstration of a specific technique that is taught to the attendees. Whereas, MAFAC strives to teach a thorough understanding on facial anatomy in a way that enables the participants to fully comprehend any particular surgical technique as well as the important anatomical considerations that accompany it. By exploring the relations of the different dissection planes to safe landmarks and explaining effectiveness and short- or long term drawbacks of different approaches, the focus is shifted towards the ‘why’ instead of the mere ‘how’. Instead of adopting a completely new technique, attendees learn to understand which parts of their personal technique could benefit from a more extensive release and have the confidence and anatomical knowledge to perform this dissection safely and successfully.

This approach of teaching anatomy requires a more profound understanding by the faculty than the mere surgical technique of the deep plane facelift. Constant learning comes naturally for our enthusiastic faculty, who share a similar passion for anatomy. Nonetheless, throughout the years, questions that remained unanswered in the literature have accumulated. For MAFAC to really be at the forefront of anatomical teaching, requires answers to these questions involving original research.

As luck would have it, not long after this realisation, Dr. Mendelson was contacted by a young plastic surgery resident from Belgium, dr. Lennert Minelli who presented him with a series of anatomical questions and the proposition to investigate these together. Prof. Ashton and Dr. Mendelson subsequently invited him to attend the MAFAC 2019 course in Brisbane, which featured Andrew Jacono and Sam Hamra, after which they spent time in Melbourne to discuss possible research projects.

A Research Fellowship was established and named the Tagliacozzi Research Fund, after Gaspare Tagliacozzi, Professor of Surgery and Anatomy in Bologna in the sixteenth century. Without doubt, Tagliacozzi is the founding father of plastic surgery, even though he lived well before it was known by that name. His flap technique for reconstruction of nasal and other deformities was described and illustrated in the first textbook of plastic surgery, De curtorum chirurgia per insitionem (‘The surgery of defects by grafting’), in 1597.

Lennert left the training program in December 2019, passed the Australian Medical Council exam in February 2020 and started working with Dr. Mendelson in March 2020. He is currently working with the MAFAC faculty on a theory on the facial retaining system, prevention of recurrent platysma banding and improving facelift outcomes on the corner of the mouth and the nasolabial fold. To keep the Faculty and MAFAC members up to date on the research being performed by our fellow, an “Anatomy News – Tagliacozzi’s Corner” was added to the website.

Pose your question about facial anatomy through the designated form, as it might lead to a news article in the future! 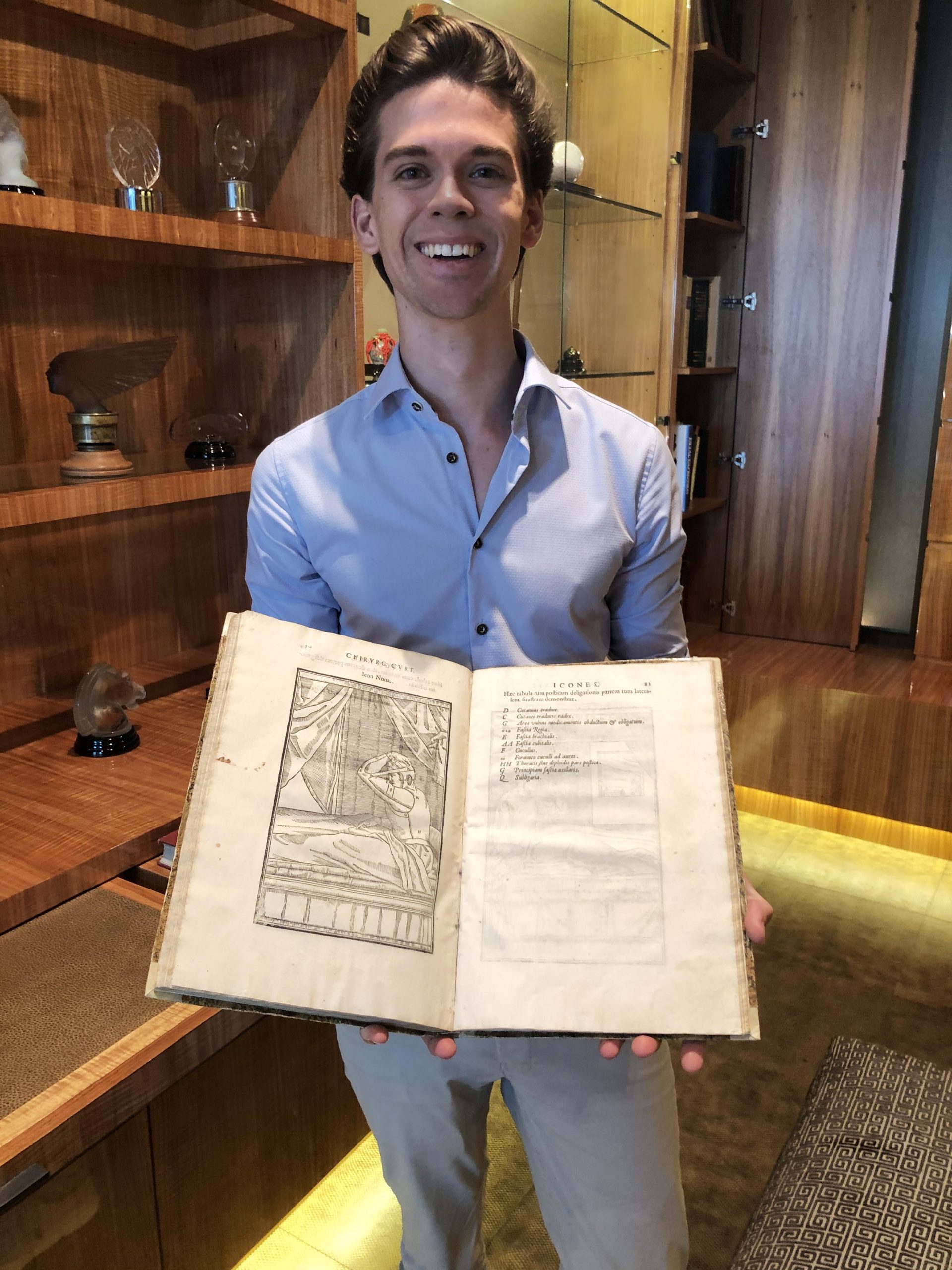 MAFAC Research Fellow, Dr. Lennert Minelli, carefully holding an original 1597 Tagliacozzi, De curtorum chirurgia per insitionem, in the personal library of Dr. Darryl Hodgkinson in Sydney, Australia. This is probably the only original copy within Australia.