Dr. Sam Hamra, King of the Deep Plane, came to Australia at the end of his long career for his final teaching in November 2019 at MAFAC. He performed for us a cadaver demonstration of his zygorbicular dissectiontechnique, shown to obtain unparalleled results for lid-cheek contouring. Because this operation is not understood, it has not been adopted by other surgeons.In this quality teaching demonstration, Dr Hamra explains his operation, based on years of experience.

The operation is based on the preservation of the zygomatic branches innervating the orbicularis oculi. A composite facelift over zygomaticus major is combined with a submuscular lower lid approach through the prezygomatic space. Stable fixation is provided by suspension of the orbicularis flap to the lateral orbital rim.

This is the only known demonstration of the technique.

This is an exceptional Educational video of Dr Andrew Jacono, the current Prince of the Deep Plane, performing a demonstration of his facelift technique on a fresh cadaver. It is of exceptional clarity, being filmed in high resolution and magnified. While operating, Dr Jacono describes his rationale as he demonstrates his dissection technique. It is possible to learn more from this demonstration than is possible when observing him in the operating room. The deep plane entry demonstrated an upper pocket superficial to orbicularis and a lower pocket through the premasseter space. The lower pocket extends under the platysma both forward and down, into the neck. The intermediate area between both pockets, where tethered by the zygomatic ligament, is sharply released and the release continues inferomedially over the surface of zygomaticus major.

A neck pocket is then raised by sharply elevating the posterior platysma edge from the anterior sternomastoid, and includes sharp release of the cervical ligament restraint, then continuing beneath the platysma that had been released from above, extending further with blunt subplatysma dissection.

The closure is performed by recruiting tissue from inferior and attaching it higher to the platysma-auricular fascia before a posterior platysma myotomy is performed that allows the lower flap to be pulled up beneath the jawline and fixed to the mastoid.

Following the operation Keith Mutimer concludes by reviewing the location of the mandibular branch, showing why it is near, yet ‘safe’. 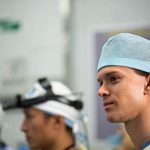 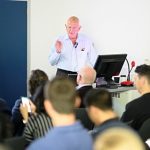